Ways you May Recognize a Kairos Moment 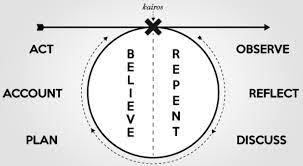 Excerpt from Make A Move by Stephanie Williams O’Brien

• Some have described having a reoccurring theme come up in their life. For instance, they read something that seems to connect with what someone shared. Then, in a time of reflection, they start to put together that this concept is not a one-off experience but a pattern in multiple areas of their life. Many say that this theme or thought lingers almost like it is following them, or it “stays with them” in their mind.

• Many describe encounters with the Bible or certain stories or concepts from Scripture that seem to come alive in a way that they hadn’t before. I’ve heard people say that a part of a passage seemed to “jump off the page.” It’s almost as if God is using a cosmic highlighter to draw out a word or phrase. I have experienced a deep resonance with a character in Scripture that seems to be different from other times I’ve read the story. For example, as I read about Peter taking a step toward Jesus on the water, for an instant I feel as though my body and my hand are reaching out as I sink, and Jesus rescues me from the waves.

• Some people describe dreams, pictures, or visions that give them a window into something God may be saying. This happens to me frequently. I may be praying for someone and have no idea what to pray, and then God shows me a picture of something. It’s usually very simple, like a child’s playset or a forest with a small opening into a field. When I share it with others, they sometimes find it strange. Other times, they tear up because God is saying something to them through that picture that I don’t understand at all. I’ve become comfortable with any reaction, knowing that sometimes it is from my own imagination and sometimes it is from God. I never suggest that I am certain something is from God, because remember, there is no such thing as certainty!

• People often share about times when they hear a word or phrase that comes out of nowhere or seems to be a novel thought—not something they have thought about before. They wonder if that could be God rather than their own will. Some describe being more certain when the phrase is not what they really wanted to hear. Often what they hear isn’t audible but gives the same sensation as if something was whispered in their ear. Sometimes folks describe a sort of depth of knowing, as though they feel they know something deep in their soul even if there is not a lot of tangible evidence.

• Emotions are another way God speaks. A person may experience a strong emotion that seems to come from left field. Or they have a sense about something, and until they stop and pray, they can’t “shake it off.” People describe having a deep peace or even a deep angst. They realize that God is moving through their emotions, and there is something to discern from those feelings. One way I describe my discernment is a feeling of resonance or dissonance. There are times when I am asking God for guidance and I feel as if someone were playing beautiful harmonies on a piano—or alternatively, as though someone were slamming multiple keys and causing a horrible, dissonant sound to rise into the air.

• I have multiple friends and community members who describe a physical sensation they have when God is moving. Some describe an increased heart rate or a sense of their palms getting hot or burning when they know they are supposed to pray for someone or take a step of faith. Some feel a sense of physical heaviness over their body or even specific parts of their body. These sensations cause them to pay attention to something, and God leads them through this mysterious experience.

• Almost everyone I’ve talked to emphasized the importance of finding a trusted community to be a confirmation counsel and help you discern if what you are experiencing is from God. Even the wisest group cannot unlock God’s mystery and know for certain what God may be saying or doing. But a trusted group of counselors—or a “clearness committee” as the Quaker tradition came to call it—can assure whether you should keep taking steps in the direction you are going or if you need to find a different route through discernment. While no other person can discern for you, often God does speak through another person as part of the process. More on the role of community in a later chapter.

• Finally, people often experience God’s leadership in very tangible ways. A door seems to close or an opportunity becomes wide open, and it seems like God’s hand was all over it. There are times when guidance from God seems to come in the form of a very tangible sign. Using the analogy from the previous chapter, I did once actually receive mail that was the final factor that led me to make one of the most important decisions in my life. I’ll save that story for later.